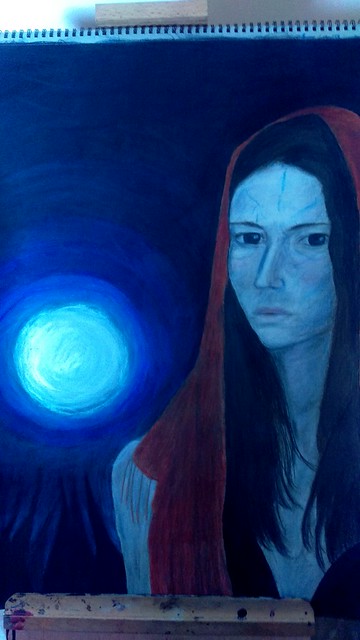 colored pencils, graphite and pastels on 18 by 24 paper 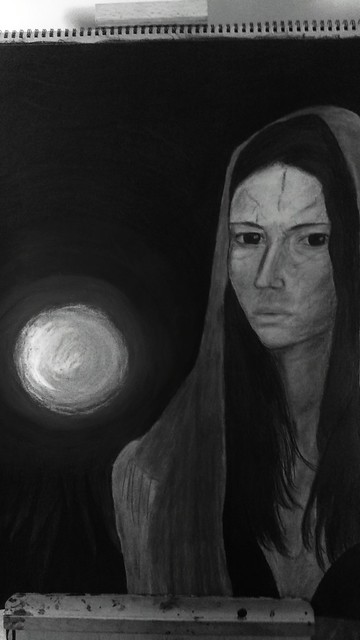 black and white digital photo of the same

From the Queen of Pluto’s Travelogue

I have disassociated – I am Queen

You like my lace?
It was made by Dwarvish Tatters
They love space and time
down to a nubbin – It’s all in the numbers my dear
in the steadfastness of equations

I am also the undisputed
Queen of Pluto, the farthest
bluest, frozen planet

I become her
cladding myself in royal vestments
scarves, old gowns.  I form a crown
for my head of sere branches.
My sister’s baton is my sceptor.

There is no heaven beyond the clouds
only the blue, breathless still of Pluto
I want to be there in the deep freeze
of never-ending winter

Not here with my father
an animated corpse, ash-skinned
with bulging veins and white-blooming
fungus from showering too much
to scrub off his sins

and my mother, who is slowly
drowning herself in glass after glass
of cheapest Julio Gallo table wine
a sour, warm, red sea
creeps up her prone body each night

It is not my ocean; mine is outer space
black vacuum –
I want to freeze till I am cyan
till I feel nothing
nothing at all

July,14 2015 photo of Pluto, the plutoid, from New Horizons Long Range Recconaissance Imager.  Not as blue as she once seemed.

“Scars have the strange power to remind us that our past is real.”
–Cormac McCarthy – All the Pretty Horses

At eleven, I wanted him to stop entering my bedroom in the pre-lit hours, his hands creeping under the covers, fingers ever cold against my legs. 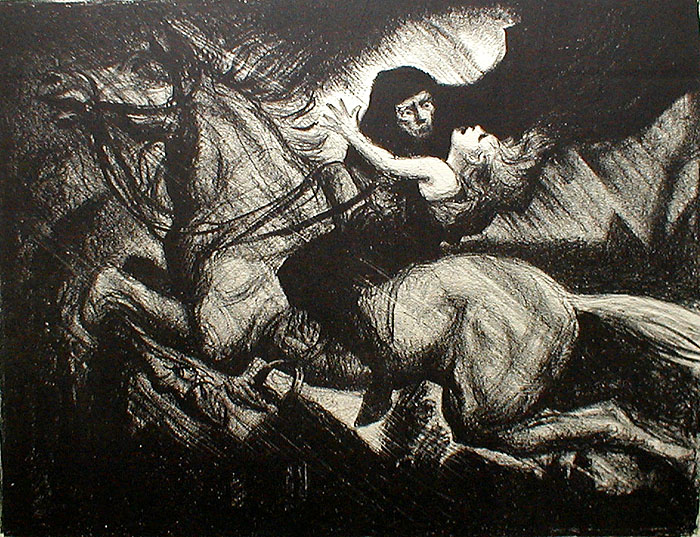 Erl Konig by Albert Sterner, circa 1910

Even with the locks mama put on the insides of her daughters’ doors, he found me on the sofa, on his bed, watching TV in the bathroom.  I tried to keep guard, watching my door – he had threatened to stab us all to death in our sleep.  I was most worried for my mother, who had no lock, but sat to sleep on the old sofa.  She tried to numb herself with wine and vodka, but night after night, it failed to work, the lie of comfort in pretty, glass bottles.  In a teeth-gnashing, half-sleep, she threw punches as if fighting angels like the biblical Jacob.

I have long loved Shakespeare, because I thought I ought to, to impress my parents, but that love had become real over the two years, which is a long time for a child.  At first I wanted to prove to my father, who called me stupid, that I was smart.  I could not read very well till I was nine. I always tested for twenty-twenty vision, but I couldn’t read – It hurt my head so – the words blurred.  At nine, an astute eye doctor discovered I had two lazy eyes, ocular muscles so weak that I could not focus.  If left untreated, I would be blind in a few, short years, my eyes having turned completely back into my skull.  What would I see?, viewing my own brain, I wondered.

After my operation, I was finally able to read and I took to it eagerly.  My eyes still hurt and I had undiagnosed dyslexia, but I ate words.  I took to carrying around a little hunters’ green, leather bound book of Shakespeare’s sonnets.  My father collected books, bookcases filled and boxes of volumes everywhere.  I understood only bits of the dense, rich language, but the more I read the pages, the more I comprehended.  My favorite sonnet was no: 18, perhaps predictably.

Shall I compare thee to a summer’s day?
Thou art more lovely and more temperate:
Rough winds do shake the darling buds of May,
And summer’s lease hath all too short a date:
Sometime too hot the eye of heaven shines,
And often is his gold complexion dimm’d;
And every fair from fair sometime declines,
By chance or nature’s changing course untrimm’d;
But thy eternal summer shall not fade
Nor lose possession of that fair thou owest;
Nor shall Death brag thou wander’st in his shade,
When in eternal lines to time thou growest:
So long as men can breathe or eyes can see,
So long lives this and this gives life to thee.

I loved this, since it proved that there was something immortal about us, even though we die.  I have come over the years to realize that this immortality is of the sentiments in our natures that are shared by all humans: love, grief, bravery, cowardice, joy, lust, maternal love etc.

I moved from sonnets and fairytales on to his plays.  I watched PBS renditions of most of them, with interludes where the supposed Shakespeare grabs a bawdy wench, which is what he was wont to do in life.  My favorite play was Macbeth, though I also liked Hamlet rather well.  I couldn’t yet relate to Romeo and Juliet, having not yet loved romantically.  I had heard of feminism, the idea of gender equality from my mother and I rather liked the notion, though it was nowhere meaningfully evident in how she lived her life, despite her wearing of pants and a dashiki.

There is something entirely feminist about those three witches in Macbeth, something dangerous fighting the male power.  Within the course of one play, they manage, through subterfuge and a little premonition, to bring down Macbeth, to bring down a kingdom.  Of course, I now know, what a bit of pro-English propaganda the play was at the time.  At eleven, I viewed the witches as women who had grown weary of being under a monarchial thumb.  Who cared that Malcom was another male monarch; such details were lost on me

Macbeth and the Witches, oil on canvas by Sir Joshua Reynolds 1789

“I am only mad north by northwest.  When the wind is southerly, I know a hawk from a handsaw,” Hamlet states to his supposed friends, Rosencrantz and Guildenstern.  Watching the play on PBS, I knew already that those fops are no ‘friends,’ but rank plotters.  I did not get why he says ‘handsaw,’ but knew that he is confiding that he is only playing at being insane.  I now know a handsaw is a type of heron and who can’t discern a hawk from a heron.  I decided his strategy is a good one.  He possesses no army and I did not possess more physical strength than my father.

One weekend afternoon in the sunlit kitchen, my father grabbed for me.  I went into acting mode, making my body rigid, pointing my finger at the window pane beyond his right shoulder.  “I see you lying in a pool of your own blood,” I intoned as if in a trance, as if I had a bit part in an old, Vincent Price movie.  He wanted to know the details of my vision, the how and when of his demise.  Although he laughed, he was fidgety and worried, grabbing another amber-iced bourbon to still his jangling nerves.  I had won the day.  I left the kitchen unmolested.

I pulled this out whenever I was in danger, but the problem was that I am also more than a bit psychic: seeing colors, lights, ghosts, and other phenomena.  This, though, was my defense, this torture of my father who had been so cruel to me, my sisters, and my mother.  It is for the time he made us all, when we were younger, sing The Old Grey Mare to our mother, who sobbed.  He was good at that, getting everyone to pick on someone.  I was just probably glad that it wasn’t me at that moment.  It was for making me feel afraid for every moment of my childhood, terrified of his unpredictable mood swings and the creatures he told me lived in our walls.

I became one with Macbeth’s witches; I entered into that withered skin – I owned it.  My stage was anywhere in the house his long, thin fingers wormed and pried.  I was still watchful of the lock on my door at night, lest he break through and carry out his threat, but I began to feel powerful.  Even though he threatened to institutionalize me in a white, padded room, I knew I was sane, at least at times, I knew this.  Like Hamlet, I became a tad unhinged by the situation of my life.  I think anyone would.

Three short years later, on an unseasonably cold, April day, I learned of my father’s suicide.  The morning before, exact time of his death, I had a premonition of darkness, the breaking of glass, and a woman’s scream.  I was immediately worried for my father, who was living with his brother, finally ordered out of the house.  He had left work muttering the mantra, “I’m sorry.”  He walked down to the subway platform and jumped into an oncoming train with such force that he went through the operator’s window.

For a long time felt guilty, as if I caused his demise.  I believed he would still be alive, if I hadn’t sought help outside my family at thirteen and committed to prosecuting him for his abuse of me.  My father was a violent pedophile who sought through words and actions to erode the self-esteem of myself, my mother, and my sisters.  He viewed us as his property until threatened with prosecution and prison.  Still, after my mother had sunk into alcoholism and paranoia, eschewing all her parental responsibilities, he would come home weary to cook dinner.  He would drive us to school and take us on day trips.  Weekends, he kept the yard neat and trim, the outside of our house painted, but it was a Potemkin village in which all sorts of ills festered.

My mother was to die a month to the day later, her liver dead inside her malnourished body.  I prayed and hoped for her to live, since I viewed her as a victim who had given up, as a drowned woman who could be revived.  I always thought my mom would’ve been good for the world had she healed, but she never got a chance, so that’s that.  She also failed to do the one thing that would have protected us: leave my father.  Her belief was that marriage was forever.  Despite the fact that she had stopped going to church, she feared disobeying the Catholic Church.

I realize now how very strong and resourceful that eleven-year-old girl was.  I am proud that she did what she had to, so I can sit here in my safe, loving home and write this out.  It is a bit like squeezing the ill humor from a boil, painful, necessary, and good.  I hope it might help someone else.  Nothing is too horrible to write or speak.  When you chronicle it, or utter it, you let the light in to heal you.  The light is shining in on me; may it also shine on you.

“The wound is the place where light enters you.”
Rumi

I stay in my snub little bed
in my concrete block room
until the clock registers 3 A.M.
My classmates still sleep
in their own monastic-style cells

My toes electrify in high drifts
The tips of my fingers, needle-jabbed
I am awake with no golden planetoid
only an aphotic deep blue-black
and seeming breaking of an aril
in my rib cage and an unlikely sprouting
for this time of year

I walk into the woods of maple and pine
snow-muffled muteness
In a clearing I look op to see Orion’s belt
like a chevron, it leads me back
back to my lamasery-dormitory

where there is no mother
no father, no aunt, no uncle
no houses too small
to contain my soul

Lucid Writing and Visuals
Create a free website or blog at WordPress.com.